KKP’s work on behalf of the FA to deliver a local football facility plan (LFFP) for every local authority is nearing completion. Andrew Fawkes explains how it has been done and what it means for local football.

Grassroots football facilities, their poor condition and impact on the pathway to performance of our national team are perennially emotive issues faced by the FA and frequently raised in the national media. However, the FA is now implementing a 10-year strategy to change the landscape of football facilities in England. This is underpinned by an action plan for investment in every local authority, referred to as a Local Football Facility Plan (LFFP).

KKP is leading delivery of the LFFP programme, working hand in hand with county FAs. This process has run over an intensive two-year period and is scheduled to be completed by mid-2020.

Working in partnership with the UK Government, the Premier League, Sport England and the Football Foundation, the FA is setting out its response to, and estimating the costs of addressing, the needs of grassroots football in light of KKP’s work. Feedback on existing facilities received as part of the LFFP process consistently mirrors that of the national strategy. It is a picture of poor-quality grass pitches, changing pavilions in need of improvement, and insufficient access to floodlit, artificial grass (3G) football turf pitches (FTPs). The cumulative ask in terms of capital investment required is huge but the FA is also playing catch-up in terms of facility numbers; England has only half the number of 3G pitches of its European footballing neighbours.

Having now spoken directly to over 2,000 grassroots football clubs, nearly 300 local authorities plus a range of other stakeholders (not to mention covering thousands of motorway miles), our team has identified an excellent portfolio of pipeline projects. Surrey is one of the areas with high potential; it is also one of the largest and most diverse of the FA’s counties. The Surrey County FA serves an area with a population of over two million people, 4,000 teams and more than 40,000 registered players. It encompasses the 11 boroughs and districts in the Surrey County Council domain plus five London boroughs. It is also an area where the county FA takes a strong lead on facilities development.

Quite a few community clubs in Surrey are, in terms of levels of demand and their management capacity, capable of taking on full-sized FTPs in their own right. As an example, following KKP’s work on Waverley Borough Council’s playing pitch strategy (PPS) and now its LFFP, several projects are either in the pipeline or are now on the point of delivery. Some of these are supported by significant Section 106 funding and all are benefitting from strategic engagement with the Football Foundation.

Of the 330 LFFPs commissioned, 70% are now signed off and being activated by county FAs working with the Football Foundation Engagement Team.  From KKP’s perspective, it is highly encouraging to note that stakeholder feedback on the LFFP development process is very positive; across all plan elements, more than 93% of those who expressed a specific view confirmed the usefulness and accuracy of their plan’s content.

This overwhelmingly positive feedback is a strong endorsement of the methodology KKP has developed over many years of experience in this field. It is also a testament to the hard work the KKP team puts in on the ground, visiting sites and engaging with clubs and communities in situ to develop real insight into facilities and the opportunities they can deliver.

Andrew Fawkes is a Principal Consultant with KKP. Contact him at andrew.fawkes@kkp.co.uk

Details of the LFFP programme are available via the Football Foundation website at https://localplans.footballfoundation.org.uk 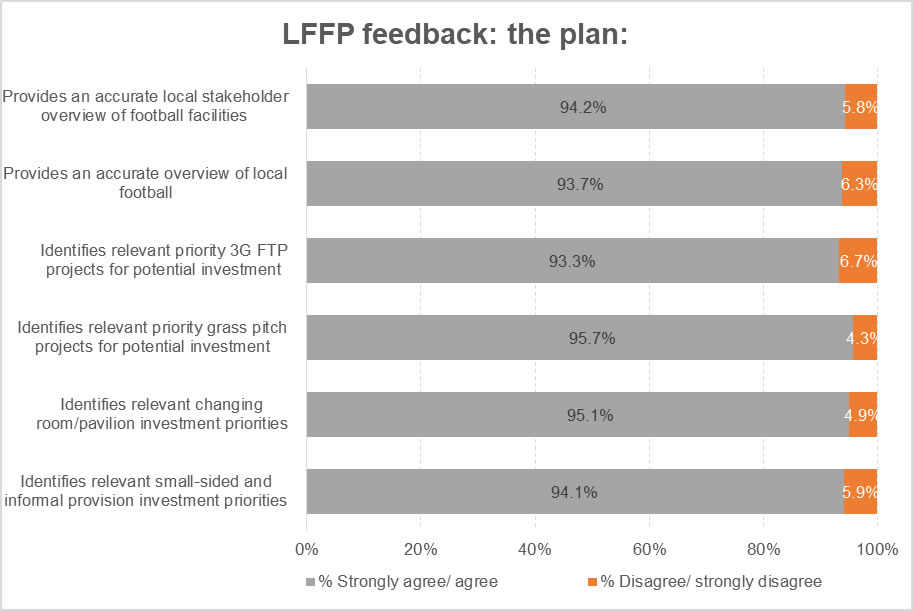 (Figures based upon receipt of 318 responses from local authorities, county FAs and other stakeholders).