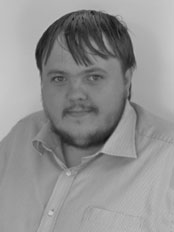 Having joined the Company in early 2014, Adam has worked at KKP for more than three years and is an integral part of the Company’s ICT and consultancy project delivery team. He has progressed from being an apprentice to now supporting all forms of GIS work and processes and is also responsible for auditing and updating KKP’s extensive GIS archive.

Over his apprenticeship period he has acquired his Advanced Apprenticeship in IT User Skills Level 3 and BTEC Level 3 Diploma in IT User Skills (ITQ). He brings a wide ranging background to his role with the Company having worked for employers as varied as Royal Mail, Barnardos and the Bolton Library Service.

He is a strong team player and, because of his ability to interpret and diagnose problems, has becoming something of a ‘go to’ person when specific processes need to be revised or designed.

In addition to his commitment at KKP, Adam has been and is involved in volunteer work. Among the agencies and programmes in which he is involved are his work with the Red Cross as a first aid volunteer and fundraiser, for V-Inspired’s Greater Manchester Youth Network, for Bolton’s Bully Free Zone and his involvement with the Royal Voluntary Service.